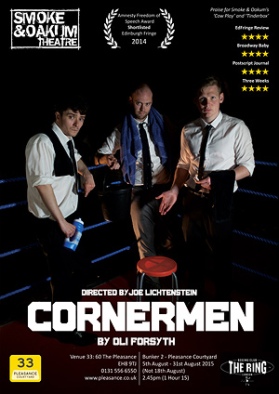 Hidden away in the Pleasance Bunker is Cornermen; a rare show by award-winning company, Smoke & Oakum. Cornermen tells the tale of a journeyman boxer turned Golden Boy from the perspective of his three managers eager for their moment in the spotlight. For those of you, as I was, unfamiliar with what a ‘journeyman’ boxer is; a journeyman is essentially paid to put up a decent fight, but to ultimately loose. This isn’t a play about champions, it’s a play about the rest.

Strangely, this isn’t actually a play about a boxer, this isn’t even really a play about boxing; there is a more universal story being told. How many of us know what it feels like to fall short of excellence? to be beaten to the post by another? I imagine many of us. This is a play for all who know that particular sting.

The playwright, Oliver Forsyth, has crafted an intimate and revealing script for us. three (and a half) distinct and realised voices with their own concepts on morality and success, reminding me of the warring contingents of a single mind. The hopeless optimist, the realist, the voyeur and the id; all there in the ring and all telling their version of events.

The text is sincere and exceptionally well crafted. Forsyth, in another life, is an accomplished poet and his craft is certainly present in his playwriting. However, you must’ve expect a flitting and romantic script; Cornermen is colloquial and rough, comic and heartfelt. This play’s success finds its foundations in the helix of viewpoints that combine effortlessly to tell a single story; none of Forsyth’s characters see eye to eye but his story meets us full in the face. The story is progressed predominately through soliloquy; a series of quick snaps out of the action in which our three managers reminisce with foreshadowing hindsight about the story as it unfolds. This technique works effortlessly for much of the play, although I felt a little harassed by them as the play climaxed; I would’ve preferred a more seamless build-up to the knock-out. I spent much of the play laughing at the well-formed array of comic dialogue but when my face was straight, I was touched by the honest and vulnerable inner workings of Forsyth’s characters.

The set is simple but effective; we are ringside. The Pleasance Bunker isn’t a large space and the intimacy works well for this play. besides a packed gym bag, the cast make use of four low stools that provide everything this story needs. I was ushered in last to my seat and found myself stage left of the thrust. Sadly, this isn’t the best seat in the house. I didn’t see much of the show head-on but, to their credit, it didn’t ruin my experience. However, I would recommend that, given the choice, you sit in the central bank or either top corner.

I got the impression that this play could work anywhere and with anything; it needs nothing more than the essentials. There was no attempt at upholding theatrical illusion, it would’ve been pointless. The actors bring with them every detail of time and place. When another voice is required, perhaps a ringside announcer or talk-show host, the actors simply provided a new voice for us – no bells, no whistles – it works brilliantly.

The performances were strong across the board. Forsyth plays Joey, the voyeur; he sees things as they are and doesn’t judge. Forsyth is a commanding presence and impeccable storyteller, able to carry all of us through. James Barbour fronts the team as Mickey, the desperate optimist and fading giant. James possesses an intimidating physical presence but has a lacerating vulnerability that makes him exceptionally endearing; you want life to finally throw him a bone. Andrew Livingstone plays Sid Sparks, our journeyman, the id (and the half). Livingstone is present throughout the play, putting on a mesmerising show of physical prowess but largely unspoken; after all, it’s not really his tale. Livingstone captures the steadfast assuredness of youth and, during his one short address to audience, conveys all the fear and desire that accompanies man’s competitive nature. My hat tips to Jesse Rutherford as Drew. I loved this performance. In a hyper-masculine world, Rutherford captures a much needed sensitivity. He is gentle but firm; creating a strong moral fortitude that exists in every word he speaks. Before the play concludes, Rutherford explodes into a new kind of father figure; one that harrows as much as it inspires.

So much love has been poured into this play. The writing is lovingly attended, the actors committed, and the practical components of actually putting on a successful play in Edinburgh are all there. All this play needs now is for people to come and see it. I must urge any punters who are on the fence about this show to go with their gut and buy a ticket. Those of you who have seen ‘boxing’ and been put of, I urge you to look again. I really enjoyed this well-executed, original play and it moved me; what more can you ask of Fringe theatre?